Many breeders and stores sell unweaned baby parrots, claiming that finishing the hand-feeding and weaning process yourself will "guarantee a hand-tame bird" and "ensure bonding." While this sounds compelling, it is not true! The seller's true motivation is to save money; hand-feeding is labor intensive and eats up profits.

Unfortunately, the mistakes commonly made by inexperienced hand-feeders often set up parrots for chronic physical and/or behavior problems that may increase the likelihood that they will be abused, neglected, unwanted, or abandoned at some time in their lives.

Inexperienced hand feeders often do not know how easy it is for a parrot chick to accidentally inhale liquid formula. Food inhaled into the lungs can result in immediate drowning or a serious, often lethal infection called aspiration pneumonia.

Crop burns are caused by feeding formula that is too hot. These injuries can form an opening to the outside of the bird's body, requiring surgery and/or leading to serious bacterial and fungal infections.

Forced weaning — refusing to feed a begging chick with the assumption that when it gets hungry enough it will eat — is often the choice of those who tire of hand-feeding before the chick is ready. Parrots in the wild are weaned by their parents over a period of months — or even years — as they learn to forage on their own. Forced weaning can result in malnutrition, starvation, and permanent behavior problems such as rigid eating habits, nervousness, and chronic begging.

Proper weaning is the responsibility of the breeder. Never buy an unweaned baby bird, and never support stores or breeders that sell them!

A Bird Mill Exposed – Part I
– By Project Perry 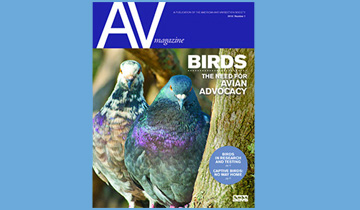 A Special Report by the American Anti-Vivisection Society